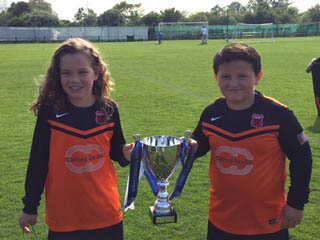 Clifford Devlin-sponsored Essex Comets Under Ten’s team completed a league and cup double with a 4-3 comeback win over Aveley Cyclones last Sunday. The Club’s Orange U10’s team, which features our Senior Asbestos Contracts Manager, Mark Collins son Ben, came from behind to win the final which was played at East Thurrock FC‘s stadium. After trailing 3-1 at half-time the team scored three unanswered goals in the second half to add the cup to the league title they secured with a 3-0 win the week before.

Based in Thurrock, Essex Comets was founded in 2007. The club achieved charter standard in 2010 is an official West Ham Foundation partner.

In June 2016 Clifford Devlin agreed a 2-year deal to sponsor the club which is part of the company’s commitment to support and develop local community initiatives.