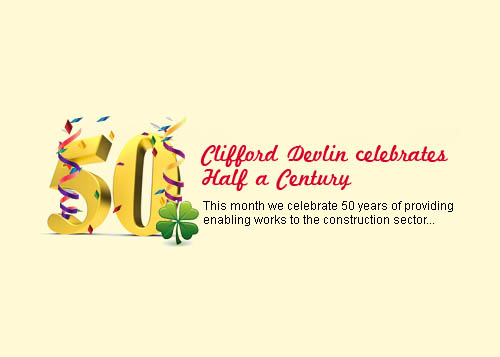 London-based demolition company, Clifford Devlin, is celebrating its 50th Anniversary. The firm has been a fixture of the capital’s demolition industry since 1962 when Peter Clifford and Alphonsus (“Foncie”) Devlin established the business in North London.

“Much has changed in the industry since then”, says Peter’s son, Tim Clifford, who is the current Managing Director, “Largely unregulated, demolition in the early 1960s bore little resemblance to the professional, licensed and sustainable industry it has become.”

The company has kept pace with all the developments and enhancements in the sector and has been at the forefront of many – being one of the first demolition companies to provide data for environmental targets (BREEAM) and sign-up to the “Halving Waste to Landfill” scheme.

The business actually started life as Clifford Devlin Transport Limited (it changed to Clifford Devlin Limited in 1997) and originally provided transport and disposal of hardcore and other wastes from demolition sites in the capital. By 1965 the Kentish Town-based business was undertaking demolition projects in its own right. In 1969 Peter bought-out Foncie’s stake but, given its burgeoning reputation, decided for the sake of continuity, to retain the original name.

A year later the company registered with the trade association – the National Federation of Demolition Contractors (NFDC). It left its North London base in 1972 to set-up a depot in Stepney, East London and relocated again in 1989 to its current Head Office in Bow.

Peter brought his son Tim in to run the company’s Transport Division and in 1984 Les Rose, was lured from Sindall Construction to Head-up Demolition Operations which were becoming increasingly complex.

Peter’s daughter Siobhan has been responsible for the administration and accounting at the business since 1983.

The business established its own Asbestos Division in the 1980’s to deal with the hazardous substance encountered during the course of its demolition projects. It became one of only a handful of companies to be awarded a 5-year license to remove Notifiable asbestos material by the Health & Safety Executive (HSE). The Division now carries out projects in its own right and accounts for over a third of the company’s £10 million turnover.

Further diversification in the 1990’s saw the establishment of a Building Division and the formation of Clifford Construction Limited to carry out all types of refurbishment and general building work. In 1997 the division was integrated into Clifford Devlin Limited and prospers as the companies Building & Special Works Division today.

In 1999 the company delivered its first £1 million plus project – the strip-out and cut-and-carve demolition of an 8-storey office block in Mayfair Place, London W1. Steady, incremental growth and sustained investment in human resources and management systems culminated in 2007 when the company was appointed as a tier-2 demolition contractor for the enabling works for the 2012 Olympic Project.

The company’s growing status has been officially recognised with nominations in four of the last five years for “Specialist Demolition Contractor of the Year” by Construction News magazine.

When Peter died in 2010 at the age of 83, he left behind a robust, multi-disciplined, confident organisation that employs over 100 full-time staff. While it remains family-owned and family-run its investment in technology, management team and systems has enabled it to build a well-earned reputation for professionalism that has resulted in long-term close trading partnerships with customers in the private and public sectors.